Ehrlichiosis is a general name for a group of acute, febrile, bacterial illnesses, caused by bacteria from the Anaplasmataceae family. There are three ehrlichial species that cause disease in humans in the United States: Ehrlichia chaffeensis, Ehrlichia ewingii, and Ehrlichia muris-like (EML). The disease is transmitted to humans through bites from an infected tick. Most cases in the United States are transmitted by the lone star tick (Amblyomma americanum), which are primarily found in the southeastern and south-central United States, from the eastern seaboard to Texas. Lone star ticks are not typically found in Arizona.
Signs and Symptoms | Treatment | In Maricopa County | Prevention | Resources | Fact Sheet (PDF) 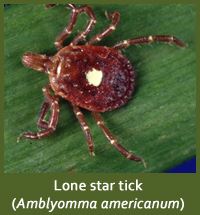 Antibodies to Ehrlichia are detectable 7-10 days after illness onset. The gold-standard serologic test looks for a four-fold change in IgG-specific antibody titers using immunofluorescence assay (IFA) on paired samples. The first sample should be taken within the first week of illness and the second should be taken 2 to 4 weeks later.
Note: IgM antibodies are less specific than IgG antibodies and are more likely to generate false positive results. IgM results alone should not be used for laboratory diagnosis.

Note: Antibody titers are frequently negative in the first 7-10 days of illness, thus serologic tests may be falsely negative during this time period. For accurate testing of suspect cases an acute and convalescent serum are necessary.

Use doxycycline as first-line treatment for suspected ehrlichiosis in patients of all ages. The use of doxycycline to treat suspected ehrlichiosis in children is recommended by both the CDC and the American Academy of Pediatrics Committee on Infectious Diseases. Use of antibiotics other than doxycycline increases the risk of patient death. At the recommended dose and duration needed to treat ehrlichiosis, no evidence has been shown to cause staining of permanent teeth, even when five courses are given before the age of eight.

Although Ehrlichiosis is not present in Arizona, there are still cases in residents who have traveled to an endemic area or relocated to Arizona from an endemic area. From 2005 and 2011, there were 8 probable or confirmed cases of Ehrlichiosis reported to Maricopa County.

A case is a person identified as meeting the confirmed or probable case definition for a particular disease.
These classifications are for surveillance only and are not used for diagnostic purposes.

Note: These data are based on investigation data maintained by Maricopa County Department of Public Health (MCDPH) and may differ from other case counts presented in other reports by MCDPH and/or Arizona Department of Health Service (ADHS).

Reducing exposure to ticks is the best defense against Ehrlichiosis and other tick-borne infections. There are several approaches you and your family can use to prevent and control Ehrlichiosis: